Home / Greece / Halkidiki / Summer On The Island Of Ammouliani, Halkidiki 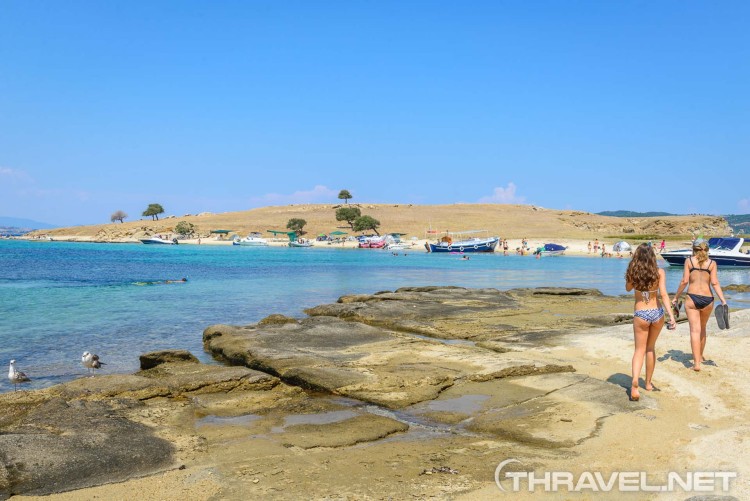 The tiny island of Ammouliani has recently became a tourist hotspot.  It attracts people who are looking for a pristine and idyllic destination for their summer vacation. Perfectly clear water, easy access with a 15-minute ferryboat trip and the inhabited islands on the south are the main reasons for tourists to come here.

Yet one can rather say that tourism has changed the face of this small piece of land in Aegean Sea. Some hotel names, supermarket labels, road plates and restaurant menus are written only in Greek. You have to ask someone local to find a place or a thing.  An unpleasant experience is to get on a boat trip around the island with a captain speaking all day only in Greek! 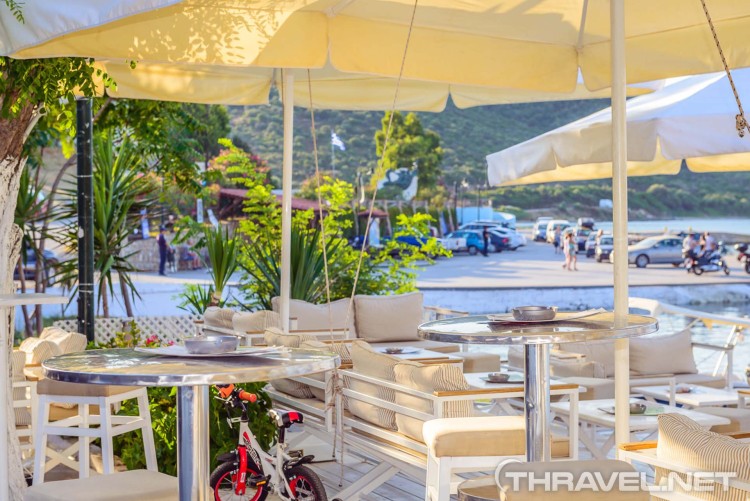 There is no old town in Ammouliani. All the buildings are relatively new, built during the 20th century. So people who like to explore the Mediterranean architecture or ancient artefacts would be disappointed.  Most hotels were built 10 years ago. Probably the oldest hotel in Ammouliani is Agionissi Resort.

The island is so small that one can literally reach each place in minutes.

There is a doctor but not a hospital. There is also a pharmacy near the port.

The island is located in the area of the peninsula of Halkidiki. It is nestled between Sithonia and Athos  which are the second and third leg of the peninsula. The island is just 4 kilometres offshore. The ferryboat station of Tripiti on the mainland where ferries to Ammouliani depart is 120 km from the second largest city in Greece – Thessaloniki. Ferryboats run every 30 minutes – at quarter past and quarter to. 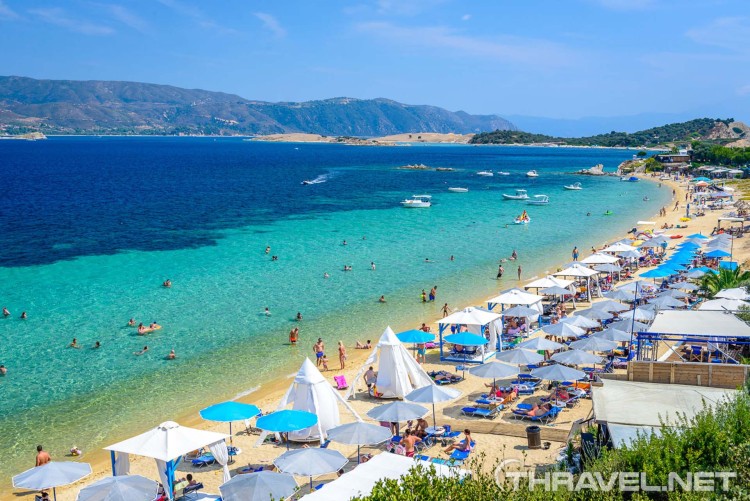 Megali Amos or the Big sandy beach is facing Mount Athos. It is probably the most beautiful part of the island because of the stunning view over the Holly place and the chain of inhabited islands of Drenia. The transparency as well the colour of the water can be compared with the best tropical getaways.

This part of the island is windier than the western coast. In the morning, the sea is more wavy but in the afternoon it calms. Even in the high season the beach is not crowded.

Almost half of the Megali Amos beach is not organized. The other part is managed by the owners of the Island beach bar. It is free to use a sun bed and umbrella if you buy a drink or snacks. There are stylish tents on the beach that cost 15 euros. They provide shelter for up to six people. There is enough space between the rows of chairs and umbrellas so that people can relax on the beach.

The only frustrating thing is the beach bar service. Staff is not very friendly. The Wi-Fi was also not very reliable.

There is one tavern on Megali Amos Beach. The Megali Amos tavern advertises itself as a place to eat “fres fiss”. They take their duty to feed all hungry tourists very seriously. All meals are freshly prepared and delicious. Prices are affordable. For example, the famous tzatziki salad (yoghurt and cucumbers) costs 3.50 euros; fried zucchini/eggplants – 3.00 euros; grilled sardines – 7 euros; grilled octopus – 8.50 euros and Greek salad – 6 euros. The tavern has a zone with tables on the beach and a terrace overlooking the Aegean Sea and Mount Athos. The Wi-Fi is free and fast.

There are no hotels or guesthouses near the beach of Megali Amos. Almost one-third of the shore is occupied by a camping. 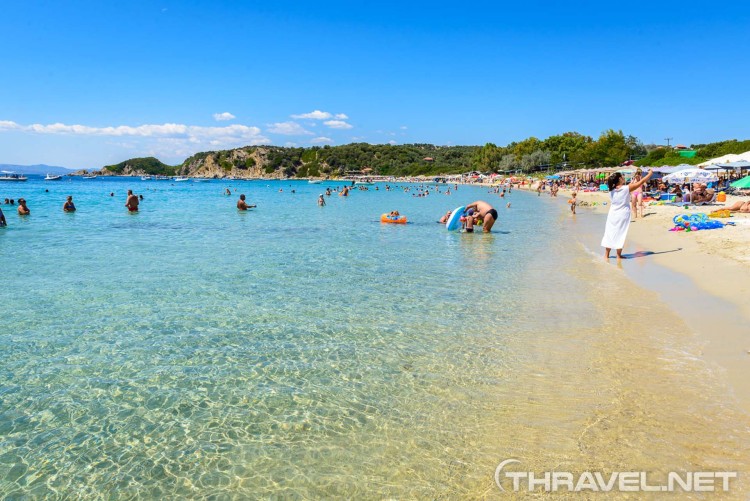 Alikes is a long white sandy beach facing the peninsula of Sithonia. The water features unique transparency. In high season, Alikes gets more crowded due to the vicinity to the main village and the port of the island. Many people from the mainland come here to spend a day on the soft sand of Ammouliani. The best part is in the area managed by the Savana beach bar. Umbrellas and sun chairs as well as the service ensure the comfort of tourists. The bar is set in the rocks and has a terrace overlooking the bay. Cocktails are better than the drinks served on Megali Amos beach.

Near the beach of Alikes, there is a typical Greek tavern “Metohi” that serves a variety of local specialties. Here we tasted one of the best Mousaka on the island. The dish is a symbol of the Greek cuisine and contains meat, eggplants, potatoes and baked egg mixture topping. 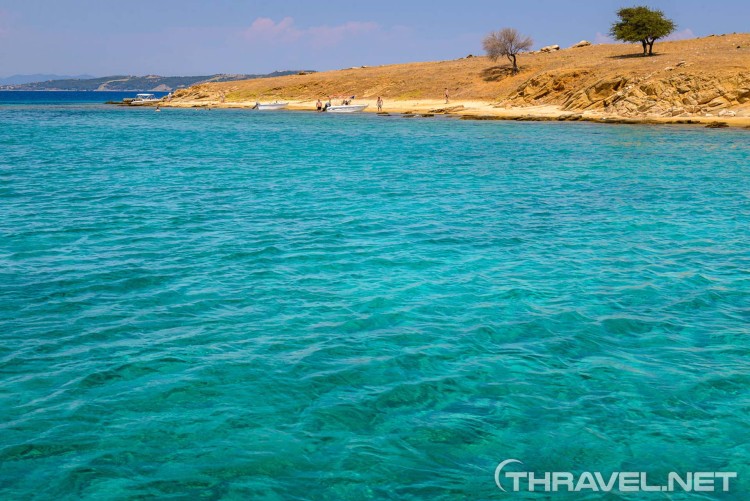 The achchipelago of six islands – Drenia, is one of the most popular spots for a daily boat trip around Halkidiki. The oasis of beautiful pieces of land is scattered in the turquoise sea. The chain of uninhabited rocks that rise from the sea is located near the southernmost shore of the island of Ammouliani. Recently, the six islets have become a top travel destination in Halkidiki. They can be reached by a rental boat or cruising tour from Ammouliani port or Ouranopolis on the mainland.

The islands are in the Gulf of Mount Athos, near the Megali Amos beach. They are famous with their golden sandy beaches, shallow water and unique landscape.

The beautiful collection of small islands serves as a barrier from the waves. The chain forms a large shallow swimming basin. The natural pool features turquoise waters and golden sandy bottom.

Only one of the islands offers services such as an organized beach, bar and tavern. The biggest island in the cluster features green hills. The beach of Drenia faces the shallow lagoon. If you climb one of the peaks, you will be able to admire the panoramic view of the Mount of Athos.

The second island consists of two plateaus with very low altitudes. The other islands are rocky cliffs with small beaches.

There are a few places in Ammouliani that can be reached only by boat. One of them is the Drenia archipelago. We could reach it either by renting a small boat or by an organised cruise.  Yet, we were not ready for a self-guided adventure.

A Halkidiki boat trip sounded interesting because we wanted to complete a round of Ammouliani and see the best beaches.  At the reception of Hotel Archontico they recommended us the Lambrini boat trip which was available every day at 12.00 from the port. The price per person was very affordable – 11 euros. The tour was planned to finish at 18:30. The focus of the Halkidiki boat trip was to explore the Drenia islands.

So, one day we headed north and we started to explore the island’s landscapes and its beaches – Karagatsia, Alikes, and Megali Ammos. As soon as we departed the port, we realized that the captain who was also the tourist guide, would speak only in Greek. That was a frustrating experience for more than half of the passengers who were foreigners. Obviously, the captain was able to understand and speak basic English but he refused to do so.  So we passed by different places but did not learn anything new about them.

After an hour, we stopped at the second largest island of the Drenia chain. The captain announced in English that we would spend 45 minutes there. There were only two trees on the island and herds of goats and sheeps – the only inhabitants there. We had to struggle with them for the little shadow.

Our second stop was the main Drenia island. Sun chairs and umbrellas were free to use but the beach was so busy that we had to sit and wait in the tavern. The food was tasty but nothing special. After 3 p m the beach got less crowded. Probably people who had come from Ouranoupolis had already left back to mainland.

Finally, we were able to enjoy the sea, sand and the amazing view. 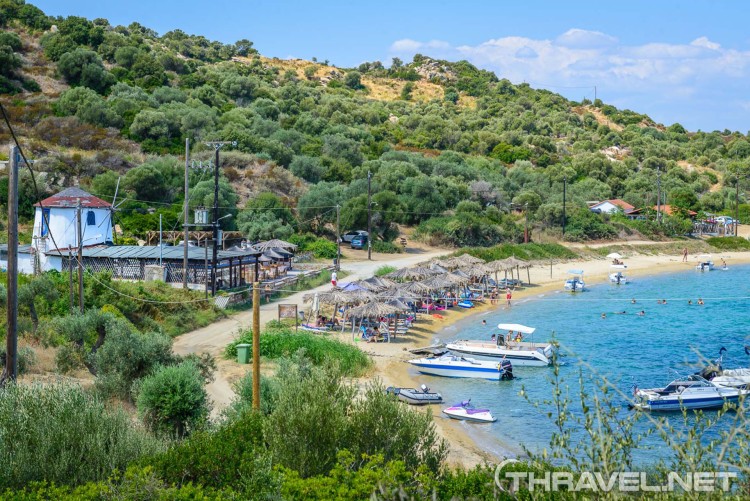 With hotel prices rising by 30-50 … END_OF_DOCUMENT_TOKEN_TO_BE_REPLACED

We stayed at Stamos Hotel, Afitos in … END_OF_DOCUMENT_TOKEN_TO_BE_REPLACED

Probably the oldest hotel on the island … END_OF_DOCUMENT_TOKEN_TO_BE_REPLACED

Vourvourou is on the eastern side of the … END_OF_DOCUMENT_TOKEN_TO_BE_REPLACED

The southernmost part of the Peninsula … END_OF_DOCUMENT_TOKEN_TO_BE_REPLACED

Neos Marmaras could hardly be called a … END_OF_DOCUMENT_TOKEN_TO_BE_REPLACED

Porto Carras is considered to be one of … END_OF_DOCUMENT_TOKEN_TO_BE_REPLACED

Porto Koufo is located on the second … END_OF_DOCUMENT_TOKEN_TO_BE_REPLACED