Porto Koufo is located on the second finger of Chalkidiki peninsula, Greece. It is hilly, plain and calm. Porto Koufo is a village for people with children – its waters are calm because Porto Koufo is also a bay. There is a port where you can find a supermarket and different kind of restaurants. There are two hotels in Porto Koufo which are exactly on the beach. One of them is called Meliton studios. It has a small amount of rooms (20) and the atmosphere is very intimate and friendly. The second one is named Porto Koufo hotel – It is a 3-star hotel and offers bed and breakfast. 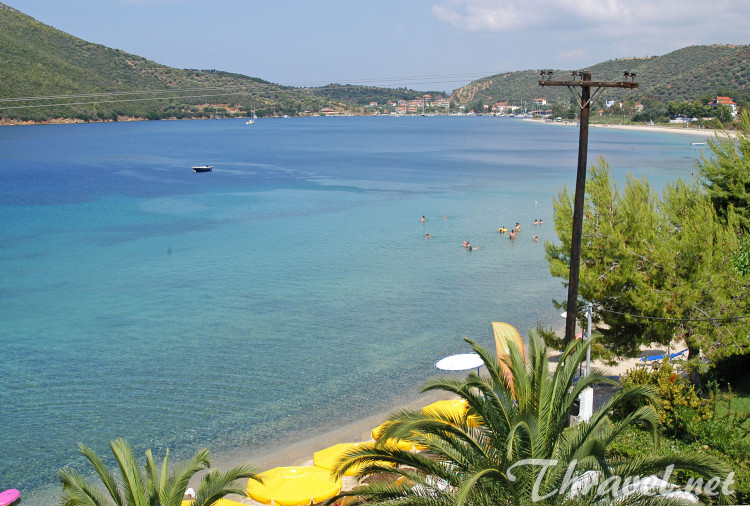 Porto Koufo bay is located in the west side of Sithonia. It is around 140km from Thessaloniki (the largest city in Greece and international port). The Porto Koufo beach is about 20km from Neos Marmaras – the main town on the second finger of Greek peninsula Sithonia.

How to get to Porto Koufo, Chalkidiki, Greece

You can get to Porto Koufo, Chalkidiki, Greece by car. The road isn’t narrow so this is s an easy journey. You can also use a boat or yacht. 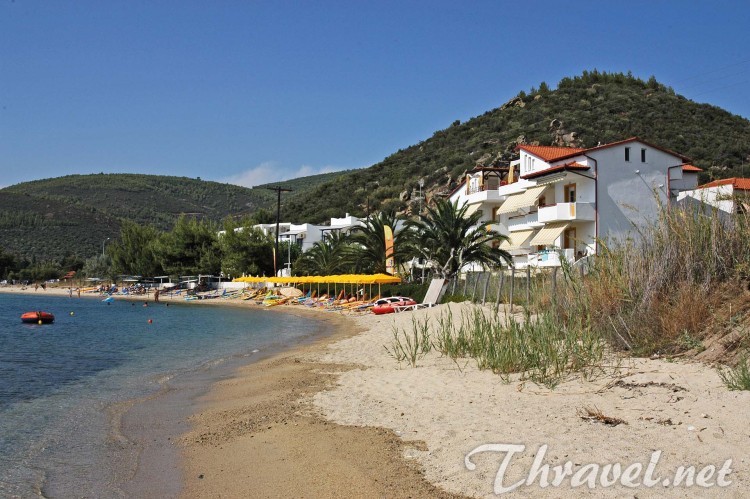 This family run hotel is set on the beach of Porto Koufo. The property is owned by Eleni and her brother Christos. Together with the other members of their big family, they do their best to make tourists fall in love in this romantic place.
Most of the visitors have been here on a vacation for many times. We personally, have stayed at Studios Meliton more than 10 times.

Studios Meliton is a pet-friendly accommodation that offers 40 studios and apartments. The building is formally separated into two sectors – A and B, each owned by Eleni or Christos.

The hotel has three floors and each level has its benefits. We personally have always preferred the ground floor because of the easy access and the close vicinity to the sea. We did not have to lock or even shut the door of the studio. We felt like living on the beach. Moreover, the private balcony was in the heart of the beautiful garden.

Maybe some people would say that rooms on the ground floor are noisier than others but we did not mind. The ground floor studios are often preferred by tourists with pets.

Rooms on the first and second floor are great because of the spectacular view over the Porto Koufo bay. On the second floor, there are two studios with a private entrance which is a benefit for people with pets. On these floors, there are suites with 2 rooms.

On the top floor are located the apartments. They are neighboring the rooms of the owners – Eleni and Christos.

It is a weird fact that although most of the studios do not have side windows, they are really comfortable. Rooms feature doors with French windows that provide enough daylight while keeping the temperature inside the studio at moderate level.

Studious Meliton have recently been refurbished. A few years ago, an epic sea storm ruined the garden and the ground floor. Due to that fact, Eleni and Christos had to renew all the furniture and to grow new plants. Now, studios feature comfortable queen or single beds, a fridge, a fully equipped kitchenette with hotplates and induction cook plates. Only the apartments are equipped with an oven. All studios have air conditioning and TV. Bathrooms are small with a shower.

Each studio has a balcony with a table and chairs. Comfortable tents offer a relaxing shadow during the day. The hotel offers free Wi-Fi internet access. In rainy weather, it can be weak.

Hotel’s guests can use an outdoor barbecue and a dining area which offer beachfront view.

Studious Meliton is a variation of a guesthouse with many rules. Here are some of them:
• Guests throw the garbage bags by themselves;
• Proprietors clean the room and change the towels every 2-3 days;
• Children are not allowed to play with a ball in the garden in order to keep the flowers safe;
• Guest are not allowed to drink or eat their own food on the tables in the garden. They can drink only beverages bought from the reception.

Being a modest but very charming accommodation, Studios Meliton is considered better than the other hotels on the bay – Porto Koufo hotel. Ten years ago, the most frequent tourists here were Greeks but due to the economic crisis they were outnumbered by Romanians, Bulgarians, Serbians and Italians.

This is a place for complete relaxation. You can sunbathe, go fishing, walk around, and canoe. On the beach, there are free sun beds for the hotel guests. The beach is sandy/pebbly.

There is a children’s playground in the hotel’s garden. Little guests can enjoy a special entertainment corner for the projection of movies.
One of the most charming places in Studios Meliton is the ship-like corner in front of the reception as well as hammocks under the exotic palm trees.

There is a volleyball court just besides the beach. Once or twice per week, Christos organises free boat trips around the bay. He is proud to show a “Jack Sparrow cave” to the children.

There is a great restaurant behind the hotel. It is also a family-run place to eat. The tavern is considered to be one of the best places to taste the typical Greek cuisine. Local people claim that citizens of Thessaloniki, which is 150 km from Porto Koufo, come here to eat on weekends.
The special area with restaurants and the small marina area are 800 m far from the hotel. There you can find a few taverns and a mini market. Fresh fish market and a gas station are close to the port.

We tried the food in each of Porto Koufo’s restaurants. Our favorite place to eat is Tzitzikas fish tavern. A family consisting of a father two brothers and a myriad of their relatives run the tavern. The staff is very friendly – they remember their customers by name, speak many foreign languages and most importantly – are great in preparing fresh seafood and fish.

On the left end of Porto Koufo bay is located a lake connected to the sea through a tiny canal. It was our favourite walking destination when we were in Studios Meliton.

The prices of a studio at Studios Meliton vary from 45 euros to 90 euros depending on the season. In 2018, the accommodation was keeping the prices at the same level of previous year. The best time for you vacation is early September, so you can book a studio for 3-4 persons for 55 euros. The Porto Koufo hotel is a little bit pricey but it offers a breakfast. The staff cleans the rooms every day and changes towels. In Studios Meliton you have to wait for this for 2 days.

You will need at about 40 euros daily if you want to eat at a restaurant. We recommend you The Tstatsikas tavern where you can try grilled sardine (small local fish) priced at 8 euros. A Greek salad is 6,50 euros, stuffed beef burger with yellow cheese – 8 euros, a bottle of Ouzo(200 ml) – 5 euros. 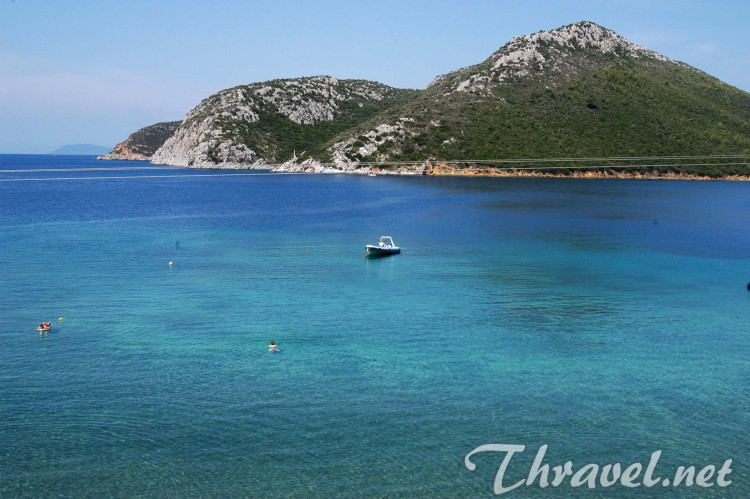 We have been to Hotel Porto Koufo once just because there were no rooms available at Studios Meliton. Both hotels are neighbours. They share the same beach on the beautiful bay. All the rooms are overlooking the Aegean Sea and the beautiful landscape of Porto Koufo bay.

Porto Koufo hotel is bigger than Studios Meliton with 49 rooms, junior suites and studios. As we were used to the warm hospitality of the other accommodation, we were not sure if this hotel was a good choice. Soon we realised that this place was also nice and friendly.

The prices of both lodgings are similar. Yet they offer different services. Porto Koufo hotel offers a breakfast included in the price. The food, coffee and juices are served in the garden, just by the beach. In Studios Meliton you can cook your breakfast by yourself or buy a toast from the reception when the owners show up, usually after 10 am. In 2018, peak prices per stay were considerably higher than before.

Porto Koufo hotel staff cleans the rooms and changes the linen on a daily basis. In Studios Meliton this happens two-three times per week.

The most beautiful thing about Studios Meliton hotel is its design. You can enjoy the wonderful view of the Porto Koufo bay from your balcony. The neighbouring accommodation features more massive balconies that do not offer the same visibility.

The vegetation in the gardens is also different. Porto Koufo hotel is surrounded by pine trees. They maintain the Mediterranean spirit of the place but create a solid natural fence in front of the sea. The Studios’s garden features beautiful palm trees that evoke the feeling of an exotic vacation. Here, there are more colourful and abundant flowers all around.

Both hotels offer sun beds on the beach for free. There is also free Wi-Fi in all rooms and in the area of the properties. The rooms have a great sea view, the breakfast is very good.

No matter what hotel you choose – Porto Koufo hotel and Studios Meliton, they are tranquil and romantic places to stay. Both buildings are set on a beautiful beach with clear shallow waters.

With hotel prices rising by 30-50 … END_OF_DOCUMENT_TOKEN_TO_BE_REPLACED

We stayed at Stamos Hotel, Afitos in … END_OF_DOCUMENT_TOKEN_TO_BE_REPLACED

Probably the oldest hotel on the island … END_OF_DOCUMENT_TOKEN_TO_BE_REPLACED

Vourvourou is on the eastern side of the … END_OF_DOCUMENT_TOKEN_TO_BE_REPLACED

The southernmost part of the Peninsula … END_OF_DOCUMENT_TOKEN_TO_BE_REPLACED

Neos Marmaras could hardly be called a … END_OF_DOCUMENT_TOKEN_TO_BE_REPLACED

Porto Carras is considered to be one of … END_OF_DOCUMENT_TOKEN_TO_BE_REPLACED

Porto Koufo is located on the second … END_OF_DOCUMENT_TOKEN_TO_BE_REPLACED