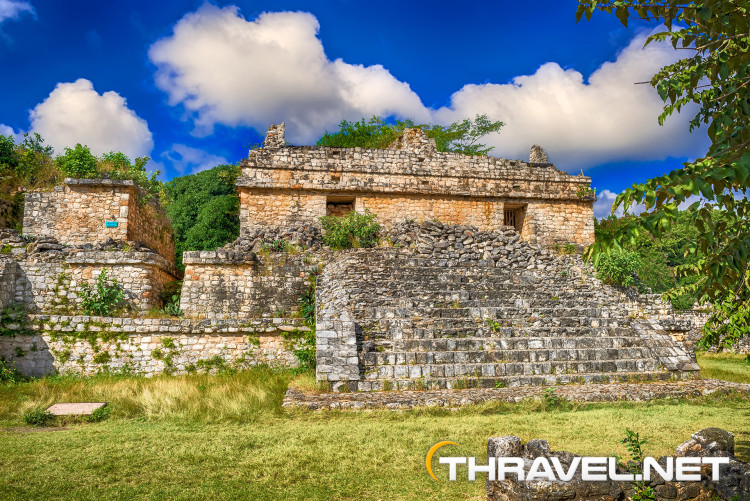 The Mayan Ruins of Ek Balam are remains of a sacred Mayan city, which nowadays is a major tourist attraction. The archaeological site is located in the middle of an immense tropical jungle in Yucatan, Mexico. The complex is 18 mi (30 km) north of the city of Valladolid. The Mayan village of Ek Balam is just 2 km from the ancient city. 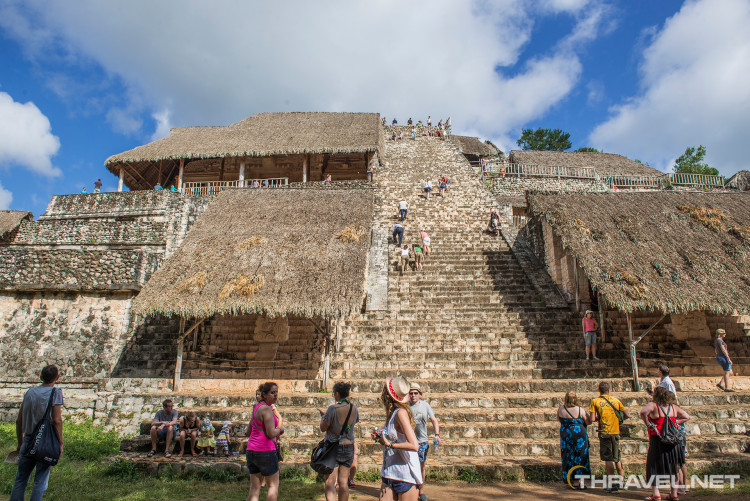 The Mayan ruins of Ek Balam were hidden for centuries in the Yucatan’s tropical jungle. The complex was built 3000 years ago. It was first found at the end of the 19th century. This center of the Mayan kingdom has become a tourist attraction since 2000. The name Ek Balam stands for “black jaguar”. In ancient Maya civilization, the big cat symbolized power and strength.

The settlement was built on a territory of 4.6 square miles (12 km2). Today, only the central area, where the Maya elite lived, has been excavated. From 45 structures that had been mapped, only 17 are open for the public. 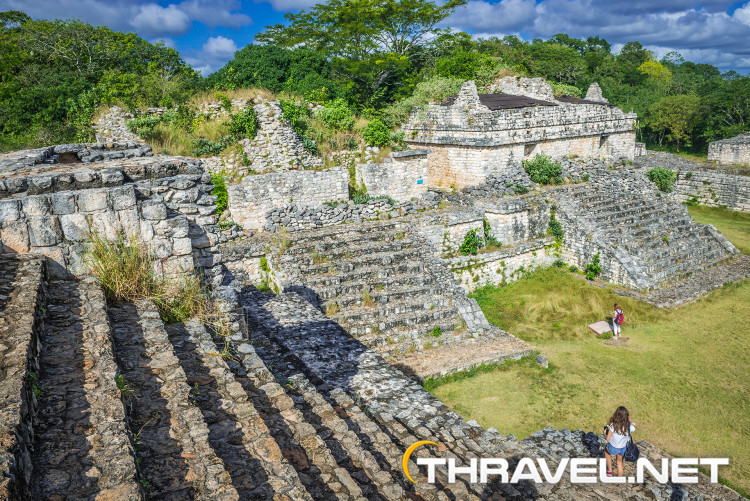 The entrance to Ek Balam and the sacred zone were protected by defending walls. Today, tourists can explore their ruins. The first thing that we saw in the complex was and the magnificent Mayan arch. Then followed the “Twins” – buildings of the ceremonial center, as well as the oval palace. Within the walls, we were able to explore two squares. Between the south and north plaza there was an ancient ball court. The main buildings in Ek Balam were arranged in two places. Inside the structures, there were rooms, altars and steam baths.

Of course, the most impressive building is the Acropolis. It is 160 m (525 feet) long, 70 m (230 feet) wide and over thirty meters (99 feet) high. With these dimensions, this is Mesoamerica’s most impressive Mayan establishment.

There are forty well-preserved rooms in the main building – Acropolis. Stucco sculptures, richly decorated sidewalks and passages from one room to another were found almost intact. They are great examples of Mayan architecture.

The colonnades of Ek-Balam are finished with stacked stones. The stucco façade, decorated with fine friezes, is a representation of a jaguar’s jaws and teeth. The building was also called “The Throne” because here the body of the powerful ruler Ukit Kan Le’k Tok’ was buried.

Unlike Chitchen Itza, the tallest pyramid in Ek Balam is still climbable. It is open for the public. It was not very difficult to climb the Acropolis. Even with the stairs wider than standard size, there were elderly people who climbed the pyramid. We could have had a rest on our way to the top by stopping on the first level of the structure. On the top of the Acropolis, the view was amazing! We were able to admire the majestic landscape or hundreds of acres of tropical jungle. What we found interesting, was the fact than not many people were visiting the place this day and we had plenty of time to admire this fascinating spot. 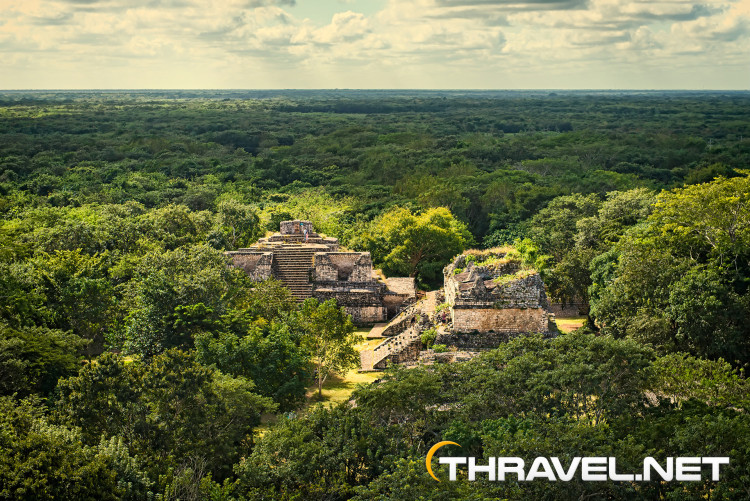 The 60 feet deep sinkhole (cenote) X-Canche with its clear emerald waters, is a natural wonder next to the archaeological zone of the Ek Balam. It is located in a jungle-covered area. The name of the sinkhole stands for “Wood snake”. The cenote is a year-round destination for holidaymakers. In its relatively cold waters, we could experience snorkeling, exploring nature and the mystical atmosphere of an ancient Maya civilization.

The place is a home of an amazing tropical fauna. Visitors are able to explore magnificent rock formations and an unique landscape.

The water temperature of the cenote was at about 24 degrees Celsius (75 F). Apart from swimming into the sinkhole, the other activity options were kayaking or rappelling down the water.

We brought our own snorkeling gear so that we did not pay additional fees for equipment. 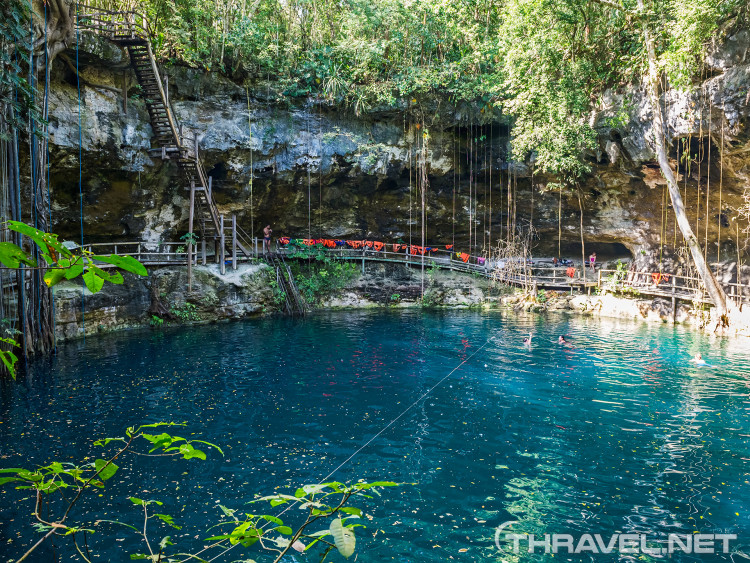 Tourist agencies in Playa del Carmen and Playacar offer an excursion to Ek Balam Mayan ruins at a price of 130 USD. You can find cheaper offers outside hotels for example on Playacar plaza. In some cases, you can save up to 30 USD per person. The trip includes transportation, guided tour of Ek Balam ancient city and swim in the water of the cenote. There are excursions focusing on activities around the cenote – snorkeling, kayaking, zip-line, and rappel. The prices are the same as the offers with an accent on the pyramid’s tour.

We did something different. The key to cheaper traveling to the Maya ruins was planning. Due to time and budget, we organized the excursion, so we could see and experience as much as possible.

We had done a research for as much information as possible about Ek Balam so that we could avoid paying for a guide. We rented a taxi from Playacar – at Viva Windham Maya to Ek Balam. We negotiated a price of 2000 Mexican pesos that included the transportation to Ek Balam and back, and two hours wait. Each additional hour would be charged 200 Mexican pesos more. We knew that the place required at about 3 hours exploration so the price was OK.

Hotel guards noted the number of the taxi we took as well as our names. That made us feel safe and secure. There were security checks also at the exit of the Playacar condominium.

The admission fee to the archaeological center was 570 Mexican pesos for three persons, which were 30 USD.

To visit the cenote, we had to pay 30 Mexican pesos per person. Since it is located 1.5 km (0.9 mi) from the archaeological site, we needed transportation. At the entrance they offered us two possibilities – a human-powered bike taxi for 3 people at a price of 150 Mexican pesos for both ways or bicycles that would be considerably much expensive. We refused the offer and started walking through a jungle trail to get to the sinkhole. Suddenly, a local staff with a bike taxi popped-up from the forest and offered a better price – 100 Mexican pesos. So we accepted.

To summarize, the tour to Ek Balam coasted 175 USD for three persons with transportation and admission fees. That was considerably cheaper than an organized tour and much less annoying. In fact we saved 215 USD! Furthermore, we managed to do the trip without feeling overwhelmed and fatigued at the end of the day. It was an exhilarating experience!

We traveled about 2 hours to Ek Balam Mayan ruins and another 2 hours back to Playacar. Our taxi driver tried two ways – north of Playa del Carmen to Valladolid and the highway passing via Tulum. The second one was shorter.

Ao Nang Beach is a hotspot for people … END_OF_DOCUMENT_TOKEN_TO_BE_REPLACED

If you are planning to go to Thailand … END_OF_DOCUMENT_TOKEN_TO_BE_REPLACED

Probably the oldest hotel on the island … END_OF_DOCUMENT_TOKEN_TO_BE_REPLACED

Just steps away from the thriving Patong … END_OF_DOCUMENT_TOKEN_TO_BE_REPLACED

As one of the top summer destinations, … END_OF_DOCUMENT_TOKEN_TO_BE_REPLACED