Home / Italy / Things To Do In Milan

The second largest city in Italy, Milan is recognised as a shopaholics dream destination. It is considered to be the world’s fashion capital along with New York and Paris. There are myriad things to do in Milan.

Even people who have not visited this megapolis yet, know the highlights worth visiting – the Milan cathedral or Il Duomo di Milano, Sforza Castle (Castello Sforcesco) and Galleria Vittorio Emanuele. 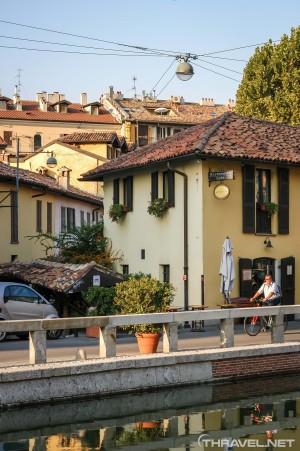 Still, there are charming little known places that are a must-see in Milan. One of our favourite things to do in Milan is to leisurely walk around the Navigli district. When we first saw it, we were amazed by the fact that Milan has canals. This area makes the city look like Venice! Local people claim that the genius of engineering and arts Leonardo Da Vinci had participated in the construction of the canal. In fact, tourists are able to see Leonardo Da Vinci’s drafts shown at the Museum of Navigli.

In the past, there used to be five canals in Milan. They were important trade routes. Several decades ago, most of the waterways were lost.

The Navigli district is a vibrant area. It boasts excellent restaurants, cafes and bars. It is lovely to walk alongside the river. After a relaxing stroll, one can stop by for an espresso, cappuccino or caffé latte. Dozens of excellent restaurants offer an authentic cuisine experience. We strongly recommend pasta pescatore, mussels in spicy tomato sauce, a pint of house wine and tiramisu.
Last time we were there, restaurants were very strict in terms of opening hours. We could sit on a table at 6:50 pm but there was no service before 7p.m. This time of the day is the best moment to visit the Navigli area. At sunset, the romantic sunlight reflects on the water. In the evening, the district becomes a buzzy spot frequented by many local citizens and tourists.

This romantic area offers an amazing range of things to do especially during spring, summer and fall. Yet, in winter some places to eat are closed. If you are fan of traditional Italian food you have to visit the Navigli.

It is easy to reach the Navigli district from Milan’s city center. We went there by foot from the plaza of Duomo taking Via Torino. On our way, we passed by Columns of San Lorenzo and the shopping street Corso di Porta Ticinese. It took us 15 minutes to get to Navigli. 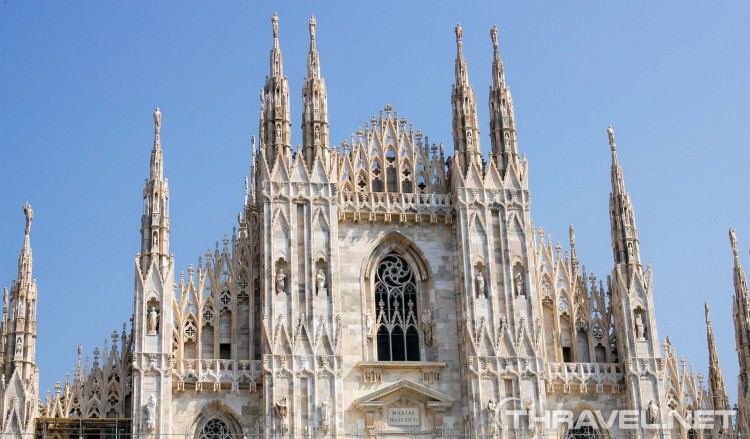 Do you know what the common thing between Navigli district and Il Duomo Cathedral is? Well, the Milan’s canals had been used for transportation of natural stones for the construction of the majestic building. The Milan cathedral – Duomo di Milano, is one of the largest cathedrals in the world along with St. Peter’s Basilica in the Vatican and the Seville Cathedral. It is located in the heart of the city. The impressive building and the plaza around it are the most popular place where tourists take photos. You can take amazing pictures with pigeons eating from your hand! Visiting the Duomo cathedral is one of the most thrilling things to do in Milan.

On the top of the church rises the statue of the Virgin Mary (Madonna) which is the symbol of Milan and the patroness of the city. The 4.16 m high statue shines brightly thanks to the use of gilded copper plates and stainless steel elements. It was an interesting fact that the enormous statue was covered during WWII to avoid providing a target for bombers.

The construction of the Milan cathedral began in the 14th century on a place which was considered to be an ancient center of Christian religion. The building and the façade were completed in the 19th century. The façade was made of Candoglia marble. It features 3400 statues and 7000 figures of saints, prophets and martyrs. 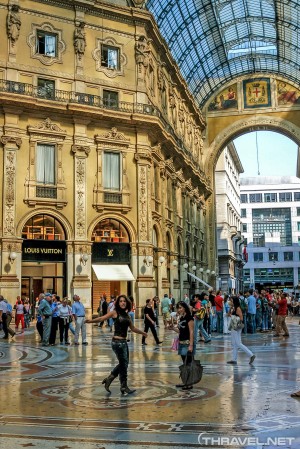 Located on the same plaza as Duomo Cathedral, the Galleria Vittorio Emanuele is one of the oldest shopping malls in the world. The majestic building was named after the Italian king who started the construction of the gallery. The shopping mall is a creation of talented Venetian architects and artists. The floor is covered in enamels. The Octagon building features mosaics that represent the heraldic symbols of Italy and other European countries.

The Galleria Vittorio Emanuele is famous with its beautiful proportions, elegantly designed windows and arches. On the walls large mosaics representing the parts of the world – America, Europe, Asia and Africa, are installed. Painted frescos on a golden background represent personifications of human activities such as Science, Industry, Arts and Agriculture.

The most popular place inside the Galleria Vittorio Emanuele is the emblem of a bull. Local citizens and tourists believe that it brings good luck to put your foot on the mosaic and spin at 360 degrees with eyes closed.

On the gallery’s ground floor there are almost 100 high-end shops. Around them there are marble pilasters which feature elegant decoration.

Things to do in Milan 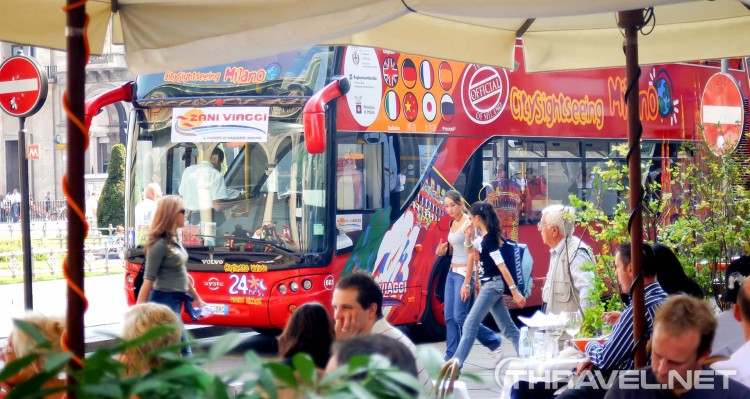 As a capital of fashion, arts and design, Milan offers lots of shopping options. On the main streets of the metropolis can be found luxurious brands such as Dolce & Gabbana, Giorgio Armani, Gucci, Versace, and many more. The vibrant city is a main hub for jewelry and accessories trade. Milan is one of the favorite celebrities fashion spots. You can shop discounted items in one of the sales outlets in the area. Local citizens claim that there are more than 6000 outlet stores in Milan’s neighborhoods. 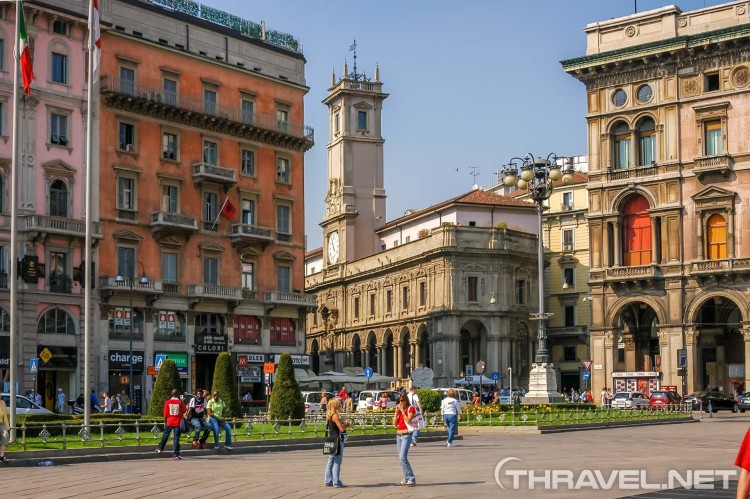 One of the most popular art spots in Milan is the gallery Pinacoteca di Brera. It boasts masterpieces of Raphael, Caravaggio and other famous Italian artists.

Visiting La Scala is also an interesting thing to do in Milan. The building is the amplest opera houses in Europe. La Scala has a reputation for being the most prestigious Opera and Ballet theatre in the world.

Sforza Castle (Castello Sforzesco) is a symbol of Milan’s historical power and prosperity. It was built in the Early Renaissance period. It features square plan with a tower at every corner. The castle is 102 feet high. Leonardo Da Vinci took part in the construction of the impressive bridge overlooking the outer moat. The artist was also commissioned to paint the frescoes on the ceiling and upper walls of the room of the planks (Sala delle Asse). 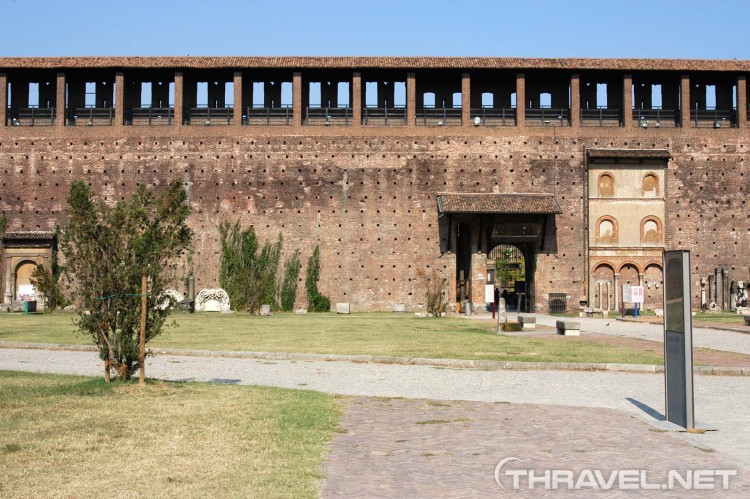 The ‘Last Supper’ painting by the famous artist Leonardo da Vinci can be seen at Santa Maria delle Grazie. The masterpiece was painted on the North wall of the chapel in the period between 1495 and 1497.

The Church of Santa Maria delle Grazie is probably the most popular holly temple in Milan. The architectural style is a mix of renaissance and gothic elements. The building is located in the heart of Milan. 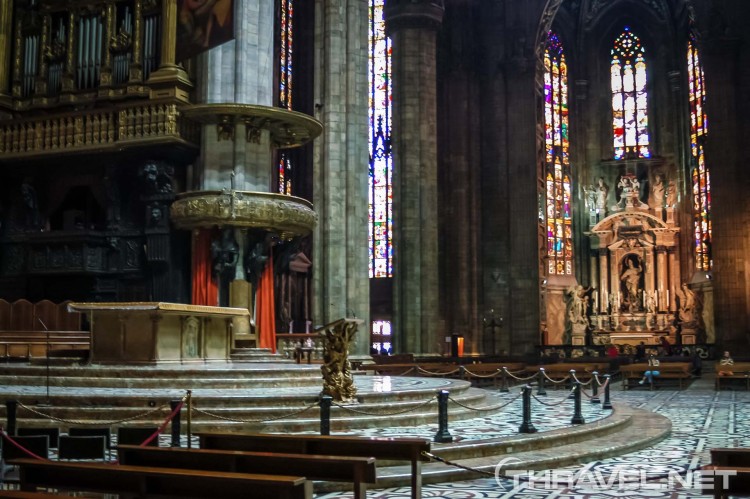 In this article, we selected the most interesting things to do in Milan according to our experience. We have visited this beautiful place three times and at any moment we were able to learn something new.

Still, the perception of the city depends on the season. Probably the best time to visit Milan is from April to June, as well as September.

Our family vacation in 2017 was an … END_OF_DOCUMENT_TOKEN_TO_BE_REPLACED